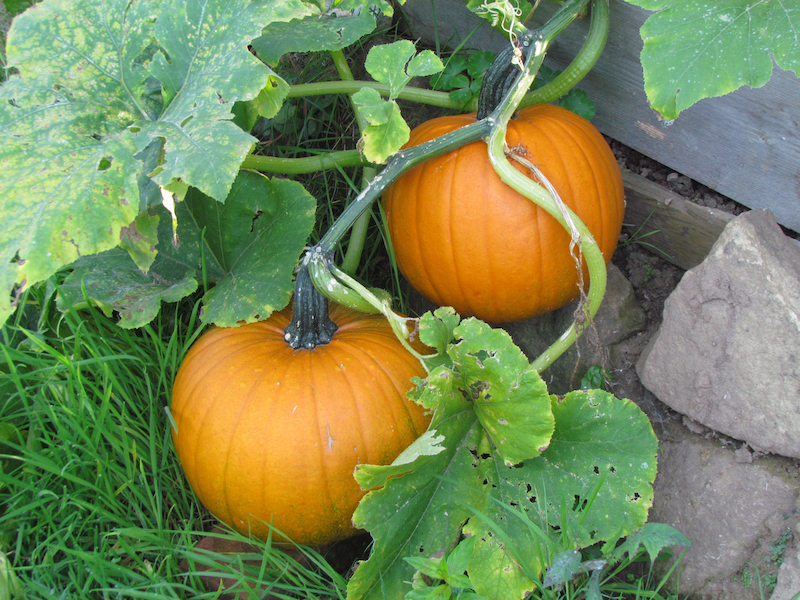 Just love growing pumpkins. Every year I keep meaning to try and grow them upright so they don't take up so much room but I never seem to get around to it. Oh well there is always next year....

Some people don't realise that pumpkins, although good at Halloween for carving, can be eaten as well. Pumpkins are picked later in the year around September or October when they have turned their orange colour all over.

They then make great soups and stews to be eaten over the winter and store well in a cool place.

I keep mine in a cool garage out of the sun and as long as the skin has had time to harden off and doesn't get damaged they will keep for a long time.

Making soups and freezing them is one way to make sure they don't go to waste.

I am usually thinking about getting seeds around March or when the weather warms up a little.

These are very similar to Butternut Squash in their growing needs.

They can be planted in April, May or June. Place one or two seeds in a pot with compost, water and leave in a warm place.

If both seeds germinate thin them into individual pots.

A sunny windowsill is good and they should germinate or sprout in about 10 - 14 days depending on the temperature. 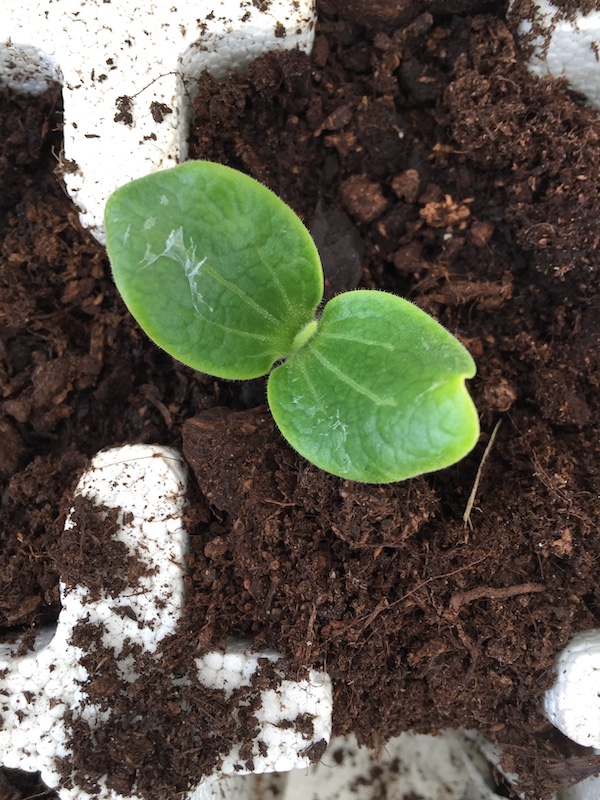 After the risk of frost has gone which in the UK can be quite late in the year compared to other countries.

This can be done in May or June. The plants need a moist and fertile soil in a sunny spot.

They need some type of feed every two weeks and water as necessary. The UK has varying degrees of summer from no rain at all to far too much.

It is fun seeing the fruits appear and when they begin to grow, it is a good idea to lift them off the ground to protect them from the wet soil and pests. Use wood planks, bricks or anything else that will not inhibit their growth.

Gradually as the weeks pass and the fruits get bigger they will change from a green colour to a lovely bright orange.

They need to ripen on the vine for as long as possible so the skin can toughen up and this then makes them last longer when picked.

Depending on the variety they can be picked in July, August, September or October.

I see these as a winter food for soups and stews so usually leave them for as long as possible and keep a check on the weather especially any signs of an early frost.

If growing pumpkins of a larger variety it is best to remove the growing tip after about 3 or 4 fruits have developed. This gives them more time to ripen as the plant can concentrate on these fruits.

If planning to grow a great big huge fruit then just have one on the plant. Feed and water well.

I have seen one growing and definitely would not like to move it once it has ripened.

It is a good source of  beta-carotene, vitamin A and vitamin C.

For me soup is the meal of choice in winter and pumpkins make lovely soups.

They can also be eaten roasted and then stuffed, placed in casseroles, pies and can be used mashed to thicken stews.

When I was younger I lived in Canada and spent many a halloween carving out the pumpkins for Trick or Treat night on October 31st.

I alway knew they could be eaten as we also made pumpkin pie with the flesh.

Over the years it is since some of my family as become vegetarian that I have realised how versatile these are so now I try and grow them each year.

I have grown these for a few years and have harvests of huge quantities and large fruits down to one or two fruits.

Some years they just don't grow.

So don't get disheartened and try again the following year.