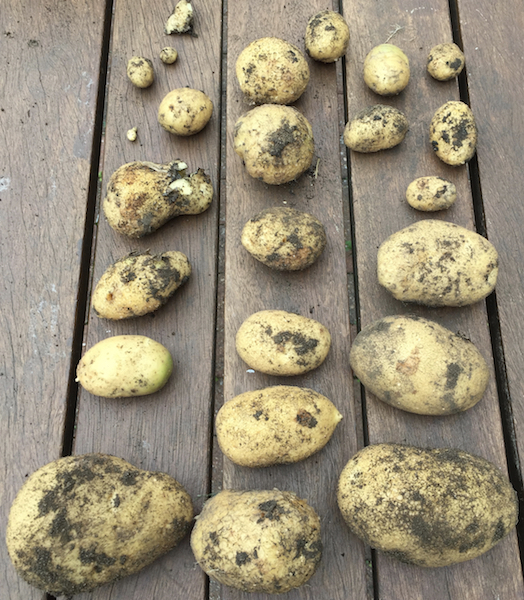 Growing potatoes in your garden and then using them in a meal is really rewarding. Whether they are in the ground or in a container the process is the same.

They are a good beginner crop to grow and while growing they help clean and improve new patches or rough land as these are usually planted after manure or soil enrichment has been added to the soil the autumn before.

It is best to get seed potatoes, these are sold in many garden centres and have been known to be free from many viruses and will give a good start. It is possible to grow on an old potato that has started to sprout but these may be prone to disease.

Before planting the potatoes should be kept in a light, cool place to encourage the eyes to develop.

This is where the new plant will form and this process is called "Chitting". The seed tubers can be placed in seed trays or egg boxes as these have individual containers ready available.

Potatoes are classed into groups such as:

The early or new potatoes are the first to be planted in April and lifted within the next three months.

Second early are planted a week or two later than first early and subsequently lifted later in the season.

Main crop are planted at the end of April or begging of May and will be in the ground for a longer time as these are harvested when the leaves begin to die back and then the fun begins is trying to find all the produce.

What group a potato is classified into really depends on how long the plant takes to produce full tubers. The early group do tend to grow quicker but the amount of potatoes they produce is smaller compared to main crop.

Preparing the ground for growing potatoes.

Potatoes need a ground that is free from frost so they can't be planted too early in the year. They also need a soil that is well draining otherwise the potato tubers will rot and soil that has plenty of organic matter.

Once the site has been selected then the season before (Autumn / Winter for a Spring planting) dig in some rotted down compost or some other organic matter. This can then seep into the ground ready for planting.

They will grow in most soils but prefer one that is slightly more acidic (pH 5-6). These plants are also part of the crop rotation as if left to grow in the same ground every year diseases can occur.

When organic matter is dug into the ground and then one year potatoes are grown there is still enough nitrogen for the second years crop that may prefer less organic matter in the soil.

Preparing and planting the tubers

After the tubers have been "chitted" so the buds have developed more and the threat of frost has gone it is time to get them into the ground.

This can be done either individually in separate holes or a trench can be dug and the tubers spaced out inside the trench.

The holes should about 7-15 cm or 3-6 inches deep and the tubers placed in them with the buds facing up. There should be a space of approx 35-38 cm or 14-15 inches between the plants and approx twice as much between the rows.

I have grown potatoes with less between the rows with an adequate supply due to limited space. If the tubers are planted closer together then the potatoes may be a bit smaller and it may be harder to pull the earth up to the growing plant.

The tubers are then covered with soil and as the leaves begin to grow the earth surrounding them is raked up so that any light cannot reach the new potatoes and make them green and possibly toxic.

Early varieties are picked when the flowers open up and main crop usually when the leaves fall back. These can be left in the ground until needed as long as you still know where they are. Use a bit of stem as a marker and leave a small amount showing with the rest removed.

They should be picked on a nice bright day, left to harden off a little and then stored in a dark cool frost free place.

Other ways of growing potatoes

They can be grown under black plastic although I have not tried this and can be grown in sturdy bags, dustbins or the containers which I have tried with good success and when grown in containers you are more likely to get all the produce.

Every year I am surprised at where potatoes grow when I haven't removed them all from the ground.

I have yet to try growing potatoes to have a Christmas.